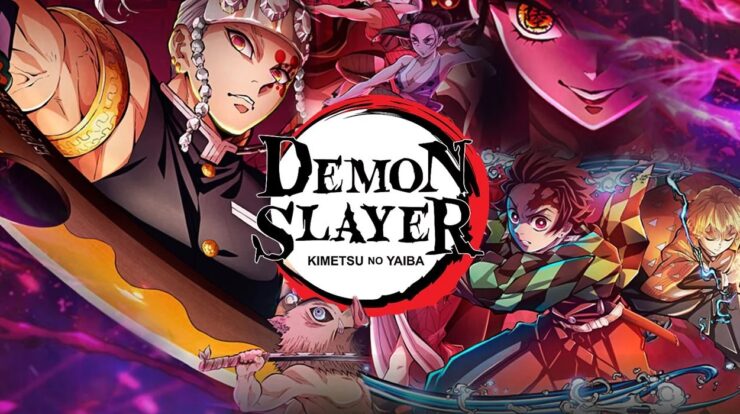 When Inosuke & Tengen Uzui are about to die in the season 2 finale of ‘Demon Slayer: Kimetsu no Yaiba,’ Nezuko rushes to their aid and uses the Blood Demon Art to remove the poison from their bodies. After assuring that his allies are safe, Tanjirou and Nezuko begin searching for Gyuutarou and Daki to see whether the demons are still alive. Now, Here is all you want to know about the season 2 episode 18 conclusion of ‘Demon Slayer: Kimetsu no Yaiba.’

After successfully defending themselves from the brutal attack of Gyuutarou and Daki, the Demon Slayers use their Nichirin Swords to simultaneously sever the necks of the brother-sister combination. Gyuutarou, on the other hand, uses one final desperate strike shortly before being beheaded. Although he is beheaded in the ensuing minutes, the blood blades he releases are poised to badly hurt Tanjirou, Zenitsu, Tengen, and Inosuke when Nezuko intervenes. 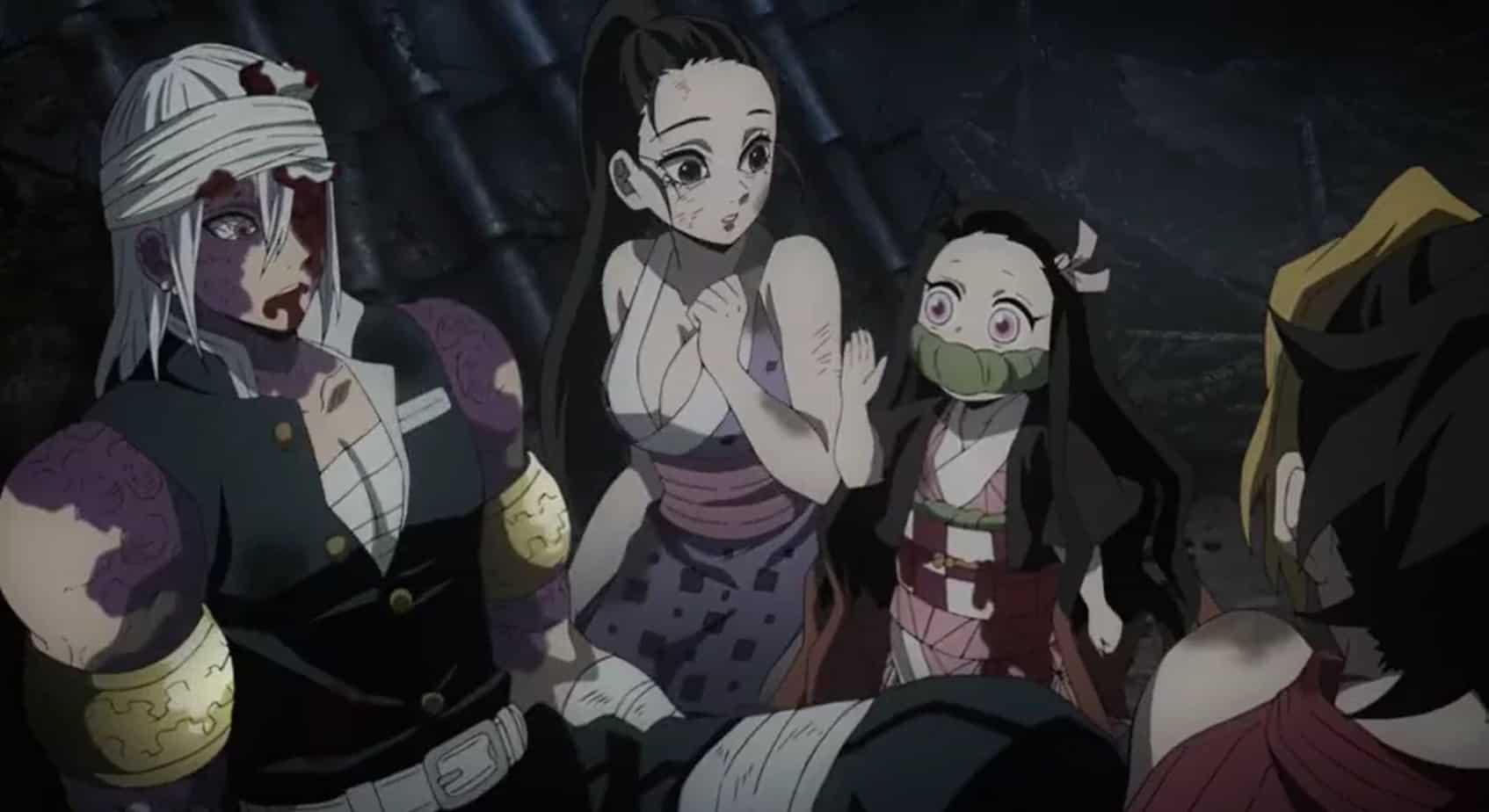 Fortunately, she rescues his brother and friends by employing her Blood Demon Art as a protection just before they are going to be torn into pieces by the blood blades. When Tanjirou learns he is safe, Zenitsu’s cry for aid frightens him. When the protagonist meets his friend, he discovers that Inosuke’s pulse is weakening with each passing second. Tanjirou is at a loss for words as Inosuke’s situation appears to be severe, and he has no idea how he can help while the poison creeps swiftly throughout his friend’s body. To his amazement, Nezuko uses Blood Demon Art to burn away all the poison, saving Inosuke’s life.

The brother-sister team then continues to assist the Sound Hashira in a similar manner, offering much-needed respite to Tengen’s three wives. When it appears that none of his comrades are in imminent danger, Tanjirou and Nezuko set out to find Gyuutarou and Daki and ensure that the joint holders of the Upper-Rank Six are finally dead. Instead, he discovers the severed heads of the brother and sister combo, which are gradually fading into oblivion. In their final moments together, the two begin to blame each other for their failure to fight the Demon Slayers. 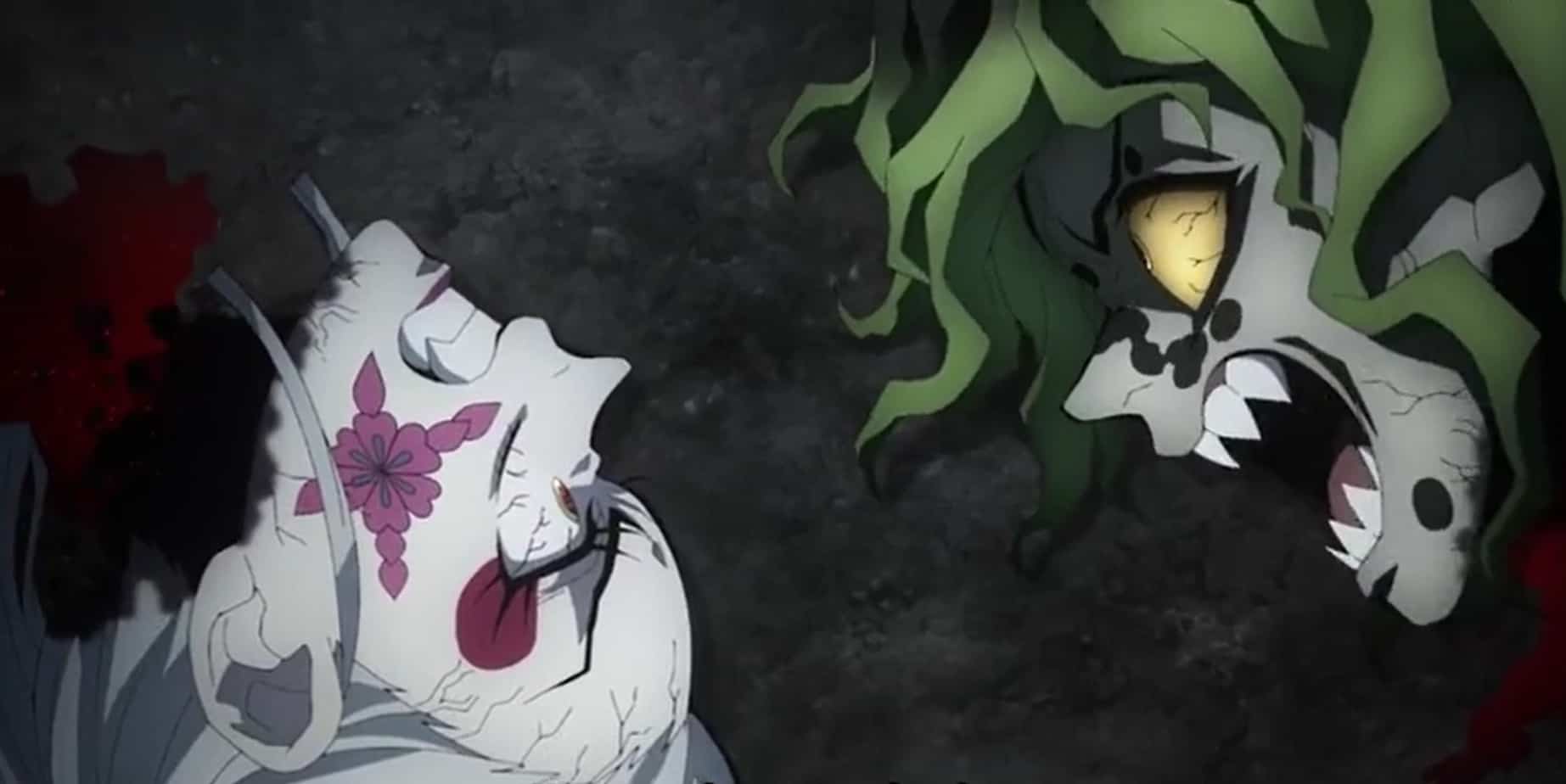 When the argument becomes heated and Gyuutarou is ready to remark that he wishes Daki had never been born, Tanjirou steps in. He begs the demons not to curse each other because they have no one else in the world and don’t even believe what they are saying. When Daki’s head disappears, Gyuutarou recalls old and terrible memories in his final minutes to resolve his sole regret before dying.

Meanwhile, Obanai Iguro, the snake Hashira, arrives at ground zero and meets Tengen Uzui. The former blames the latter for his injuries, claiming that he should have easily handled the Upper Rank Six demons. Instead of disputing, Sound Hashira discusses his choice to resign, dismissing Obanai’s concerns. Muzan Kibutsuji summons Akaza to the Infinity Castle at the same moment. 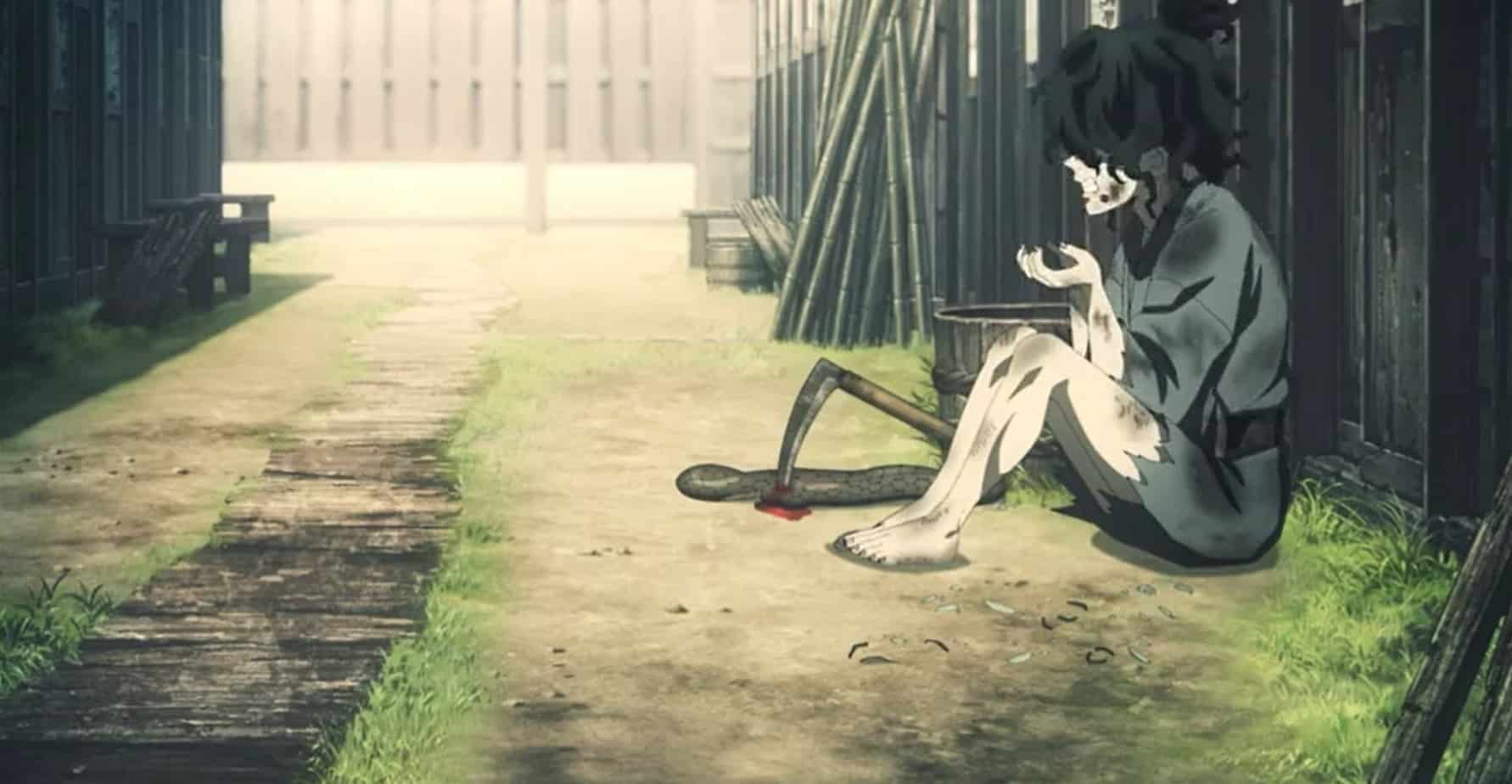 Gyuutarou begins to recollect the brother-sister duo’s terrible past shortly after Daki’s death. Gyuutarou was formerly just another average youngster living on Rashomon River Bank, the Entertainment District’s poorest district. The level of life was so low there that children were seen as a misfortune by their parents, who could hardly make enough money to feed them.

Gyuutarou’s mother tried to murder him several times, but the helpless child always survived the cruel beating. To make matters worse, the folks there were cruel to Gyuutarou because he was unattractive. To sustain himself, he frequently resorted to hunting rats or bugs with his sickle. Yet, his world was turned upside down when Ume (Daki) was born. Gyuutarou’s inferiority mindset was broken by her gorgeous face, and he finally learnt to accept himself and the evil world around him. He quickly began fighting and became a collector.

Despite the harshness that surrounded him, Gyuutarou’s existence appeared to make sense, and Ume gave him a purpose to live. However, he was no longer a helpless victim, and the brother-sister team had learnt to fight for their lives by this point. As they grew in power, so did their foes, and Ume’s use of a hairpin to blind a Samurai turned out to be a terrible error. Her perpetrators kidnapped her and then burnt her alive. 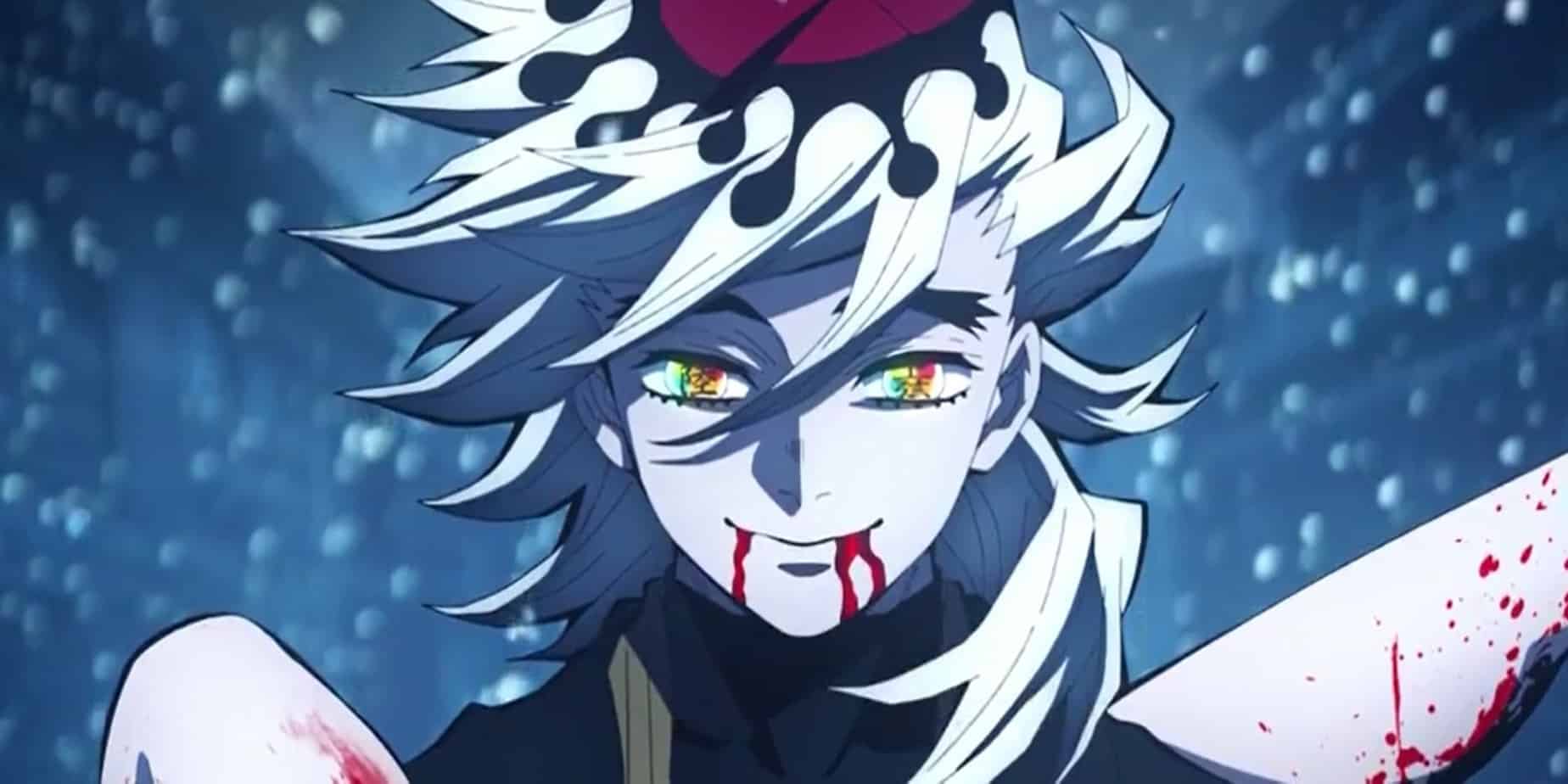 When Gyuutarou saw her burnt remains and began grieving for his sister, he was also attacked by a Samurai on the orders of a lady. He, on the other hand, fought back and murdered both the lady and the Samurai minutes later. As he began to mourn again over Ume, an Upper-Rank demon appeared and chose to grant them the opportunity to join the Twelve Kizuki.

The brother-sister combo grew into formidable demons that slew numerous Hashira over the course of several decades. Joining Muzan Kibutsuji’s armies, on the other hand, was formed by years of brutality and tyranny that Gyuutarou and Daki endured in silence while living on Rashomon River Bank. So, as necessary as it was for them to accept the invitation to join the Demon Lords’ army, their hatred for the world was as significant in moulding them into true demons.

Why is Akaza Summoned to the Infinity Castle by Muzan Kibutsuji? 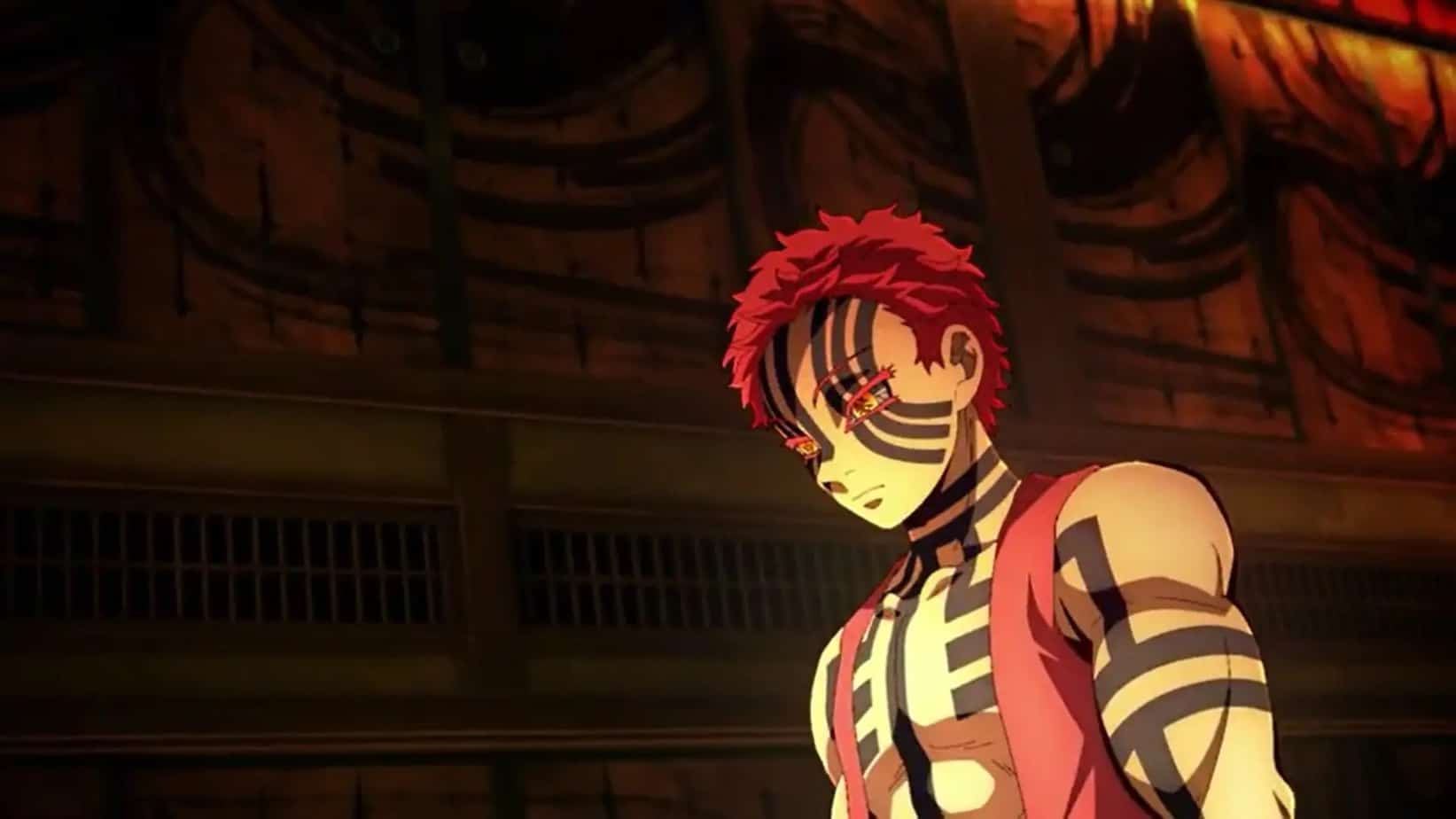 In the concluding moments of Demon Slayer Season 2, Akaza finds himself in the Infinity Castle. Muzan Kibutsuji never summons his minions unless there is bad news, thus he instantly recognises the seriousness of the situation. When he summoned the Lower Six demons in the season one finale, he cruelly punished them. Muzan slaughtered the majority of them because they were too weak.

Rui’s murder enraged the Demon Lord on Mount Natagumo, and we witness something similar happen in the season 2 Demon Slayer climax, shortly after Gyuutarou and Daki’s beheading. It is worth noting that the Upper-Rank demons have not been summoned to the Infinity Castle in the previous 133 years. While the anime does not depict what happens next, the Demon Lord will almost certainly warn the Upper-Rank demons.

These stronger troops of the Twelve Kizuki, unlike the Lower Rank demons, have been around for hundreds of years and have chased numerous Hashiras in their lives. As a result, murdering any of them for Muzan is similar to shooting oneself in the foot. However, it is not surprising that he will chastise the Demon Slayer before providing his blood to some of them.